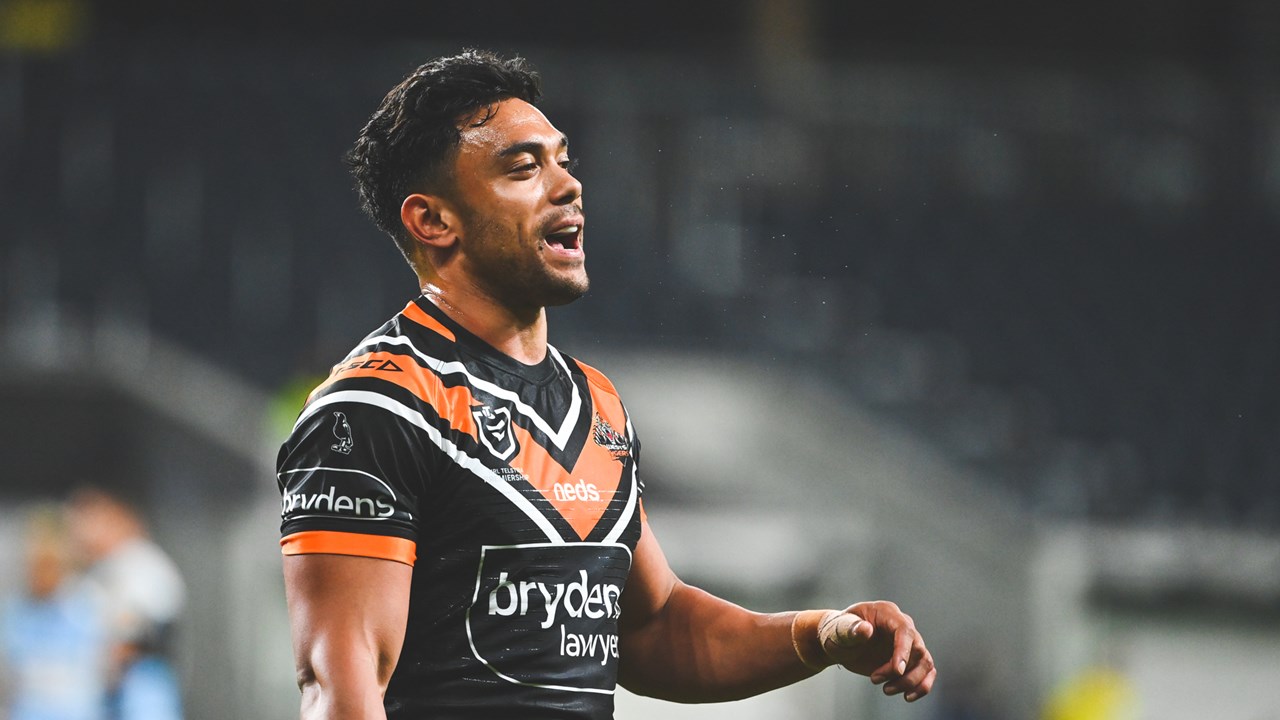 The Tigers loom as an intriguing side in 2021 with a few new facing injecting life into their attack.

An improved side would present plenty of PODs to begin the year, and they boast a few key cheapies, but will they deliver on an impressive trial victory?

Here’s how we think the Tigers will line up and whether or not it’s worth investing in their squad to kick-off the season.

The Tigers play in Round 13 and have the bye in Round 17.

I don’t think Moses Mbye even knows what his position will be in Round 1.

He’s the perfect bench utility, so I see him deputising for Liddle for 15-20 minutes at hooker per game, then playing a roving lock type role while covering any backline injuries.

Regardless, he won’t be SuperCoach relevant. 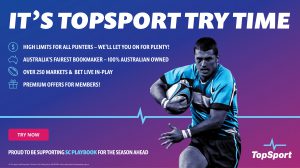 The former Eel comes with big wraps, but we only saw a glimpse of him last season.

He’ll be pretty hard to pass up at the price, but he looks like a genuine slow-burning cash cow.

The makeup of the Tigers bench will be key, but it’ll likely have a reserve hooker, two props and a back-rower, so he should see some reasonable time.

He won’t make quick cash, but with very few cheapie or mid-range cows in the forwards (hooker aside), I think he’s one of the far better picks.

He’d have to play 45+ minutes to warrant consideration which likely won’t happen unless injuries strike.

Rusty won’t get the game time early on to become SuperCoach relevant despite the cheapie price tag.

He looks an absolute star and is pushing for a starting spot in Round 1 (pending injury) which would make him a must-have once he returns from injury around Round 5-6.

Even off the bench you’d think he’s shown enough in limited opportunity to warrant an increase on his 26 minutes from last season.

If he’s off the bench he’ll make a fairly slow burning cow and is probably still a buy, if he’s starting he’ll make cash fast.

The Tigers recruit is expected to be catapulted into the starting fullback role for Round 1.

In one 80 minute game last season he scored 71 points with a ridiculous 45 in base!!!

He scored a double in the trial win over the Sea Eagles within 10 minutes.

A one game sample size shouldn’t be read into too much, but if he is starting come Round 1 you can’t ignore him.

He looks a safe play in 17s as a cheapie CTW, however the Tigers do have a brutal opening to the season which should be noted.

My long held ploy to never pay over $550k for a CTW (unless available at fullback) was foiled for pretty well the first time ever last season.

Nofa went mental from Round 1 and just didn’t drop value due to his outstanding year.

It’d take another immense year to back up his stats and I think he’s priced at his absolute max.

The Tigers start the year against Raiders and Roosters, one low score there and he’ll be dropping value.

He’ll be a priority recruit for me early in the year, but I’m almost certain he’s at maximum value and that we’ll get him significantly cheaper in time.

Don’t get upset by the rating, he’s the number one CTW, but I just can’t justify that value in Round 1 with that draw.

Joey always generates some interest off the back of a few good years, and while I’ll never put a line through him, it’s hard to make a case for him to start the year.

He’s averaged from 47-51PPG in his past four seasons, and averaged a mammoth 72PPG in 2016 when Leipana went bonkers.

His 22BPG last year was ordinary, while in 14 games he had 48 tacklebreaks and 24 offloads.

All solid numbers, but not quite enough for his poor base stats.

He had four scores of 30 or below last season and nine under 45.

It’s tough to get an accurate gauge of his base in recent years due to so many limited minute games with injury, but it looks to fall around the mid-20s.

I’m very tempted, but it could go either way. He’s another who I’ll be keeping a close eye on in the trial to see how fit he’s looking.

The thing I do like about him is that he has certain job security unlike many others, however that’s probably nullified by his injury risk.

I am concerned about the ability of the players inside him to unleash him to his full potential, while the opening games against the Raiders and Roosters is also a worry.

Kepaoa is fighting for the vacant wing spot with Tommy Talau, it could go either way, but he did start over Talau in the trial game in a decent indicator he’s ahead in the pecking order.

He’s a promising rookie, but with job security issues he’s hard to have at the extremely awkward $398k mark.

He scored four tries in his five games last season, with 22BPG.

He also had 10 tacklebreaks in a very handy sign of what he’s capable of.

Not for me to start the year, but certainly one worth watching as he develops in the top grade.

Doueihi is unavailable for Round 1 but is expected to start at five-eighth on return in Round 2.

Jock Madden will likely deputise in the season opener, while Moses Mbye is the other option.

He’s likely to kick goals on return, however Brooks hit them well throughout the pre-season, so you can’t bank on him definitely retaining that vital duty.

He’s hard to assess having spent last year at fullback with a few games at centre.

As such, his 27BPG is pretty irrelevant for analysis purposes.

He’s awardley priced, not playing round 1 and in a new position, so while I’m not saying he can’t be SuperCoach relevant this season, you’d be mad to start with him.

Brooks has sparked some interest due to the lack of decent reserve halfback options to start the season.

He averaged 58PPG back in 2019 which is what has people intrigued.

With Benji out of the way, he should be the dominant playmaker and can imrpvoe significantly.

If we knew he would definitely kick goals when Doueihi returned he’d be an enormous option, but at this stage it’s unlikely which hurts.

His 23BPG isn’t great, but also not terrible for a halfback.

In 17 games last season, he had four tries and only five try-assists.

It makes for fairly grim reading, but it does lead you to believe he surely has to improve on it in 2021?

I won’t be going near him, but I can see some appeal in the move, purely due to the complete lack of options at halfback behind Nathan Cleary.

Tamou averaged 43MPG last season, and 51MPG the year prior.

That was in a pretty stacked Penrith back, the Tigers are a little lighter on up front and will have Mbye or Simpkin at 14, so he can improve on that in 2021.

If he does, you could make a case for improved SuperCoach output.

He scored at a monster 1.26PPM last season, so if he gained 5-10 minutes extra there’s money to be made.

His 50BPG is impressive, but it also shows his lack of attacking upside and small ceiling.

Not for me, but worth watching his time early in the season.

The Tigers hooking rotation has been such a big SuperCoach talking point all pre-season.

The closer we get to game day, with the emergence of Laurie at fullback, I think Mbye plays 14 and Simpkin misses out.

Liddle started in the huge trial win over Manly, so that’s a fair indicator he’ll get first crack.

Mbye at 14 will give Madge Maguire the option to spell Liddle for 15-20 minutes if he pleases.

No Simpkin on the bench would bring Liddle into contention. This is all speculative at this stage, team list Tuesday could throw up anything!

We could guess that with 60 minute per game he would score at around that 0.8-0.9PPM, but it’s very hard to assess.

He has a strong running game so he can accrue some attacking stats.

Injury is obviously a huge concern, but if there is no Simpkin on the bench come Round 1 he’ll be a decent buy, I’d avoid if he is named.

*Rating based on no Simpkin on bench.

Of his 38.5PPG, 37 came in base stats, so he has a small ceiling and little attacking upside.

He’d have to play 50+ minutes minimum to warrant consideration in my eyes.

Monitor early, but hard to have.

I like Garner as a footballer, and he locked down that edge role pretty well last season.

As an 80 minute player there is some upside in him, and he can find the try line with six games last season, but there appears better options to start the year.

He’s not assured of that 80 minute starting role so there’s too much risk.

Luciano is an intriguing prospect to start the year having looked very damaging in the pre-season trial.

While everyone will flock to the likes of Matto, Lolo and Crichton, Leilua will certainly start the year at low-ownership.

His base not might be among the elite back-row options, but his attacking upside and ceiling is right up there.

I’ll go with the more tested back-rowers to start the year, but he’s one for exotics looking for a POD with upside and a decent base.

When he did play more time last season he maintained that 1PPM fairly well.

He started at lock early last season against the Raiders, playing 80 minutes and producing 80 in base! Incredible.

His 57BPG was exceptional, so if he can jag a 65+ minute roll which is possible, you’ve got one of the safest options in the game who would also be starting underpriced.

The issue is that he didn’t have a single offload last year, and had just six tacklebreaks.

He has a low ceiling with almost no attacking upside.

I won’t start with him, but if the minutes do come he’ll be a serious buy, especially with the dual 2RF-FRF status.