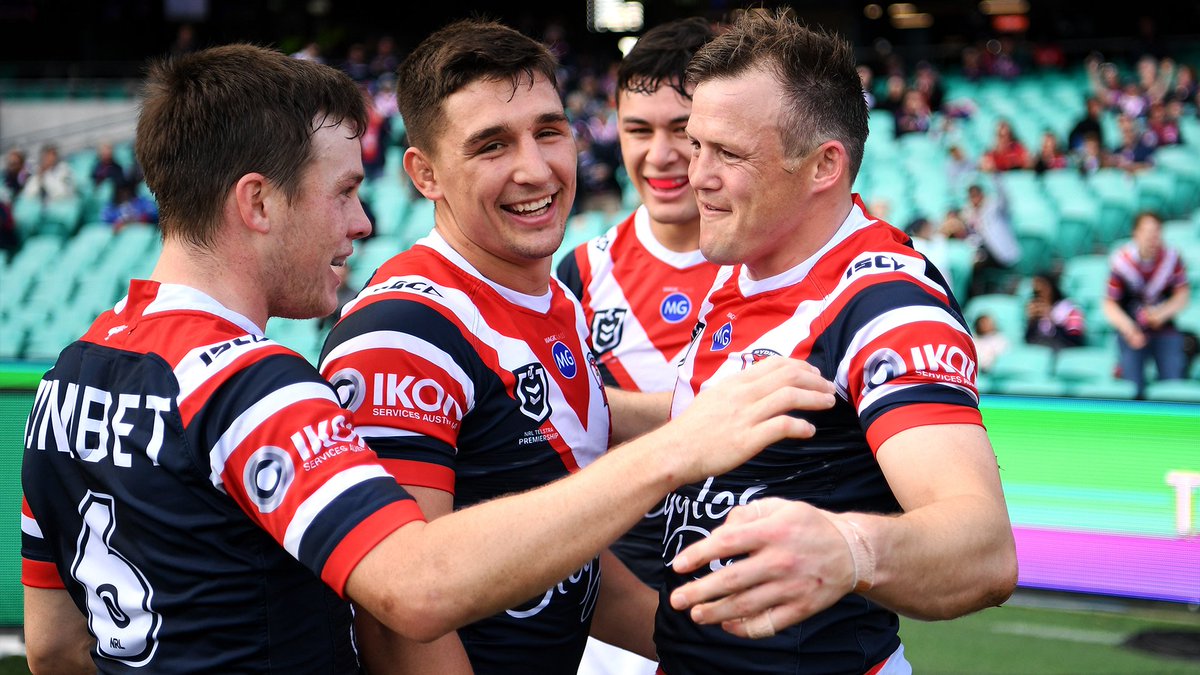 The reigning premiers the Sydney Roosters have started the season winless, and face South Sydney and Brisbane on return, but they boast plenty of strike power for SuperCoaches to utilise.

Teddy has made a habit in recent years of stinking up his SuperCoach season opener. In the past three seasons he’s produced scores of 39, 23 and 35 in Round 1. Being the freak that he is, he bounced back in Round 2 for scores of 85, 52 and 113 in the same years. Incredibly, in the 9-8 slugfest against Manly Tedesco didn’t record a try or try-assist. He accumulated his 85 points with 21 runs, six tackle breaks, three offloads a linebreak and a line-assist.

As we know, he is absolutely elite. Unfortunately for non-owners his opening round 39 will drop out of his rolling average after Round 3, so he may not lose too much money. That being said, the Roosters have been dealt a cruel reopening to the season with games against the Rabbitohs and Broncos. Let’s hope for another low score that may allow us to jump on as soon as he drops below $700k.

While the POD play is enticing, the likes of Holmes, Ponga and Papenhuyzen are going well enough that I don’t believe we need to force the early play for Teddy at his monster price.

Tupou has always been a fairly underrated SuperCoach prospect and he’s showing promising signs again in 2020. Despite playing in two tough encounters, he’s recorded an exceptional 33BPG and was the only scorer for the Roosters in the loss to Manly.

If it weren’t for the tough upcoming games against the Rabbitohs and Broncos he would be a left field POD with upside, but it’s a hard trade to advise with the draw. If he can maintain similar base in those games which will likely lead into easier fixtures, he’s one to seriously watch.

After opening the season at centre, reverting to the wing on the end of a stellar Roosters backline will ensure B.Moz bags plenty of meat, but it’s hard to see him matching the elite CTWs.

You can almost put a line through Manu as a SuperCoach option. His NRL ability always makes him enticing, but he lacks the base to warrant consideration. He’s never averaged above 49PPG despite playing in a premiership side for the past two seasons.

The hope was that he’d see more ball on the right edge with Latrell Mitchell having departed the club, but it hasn’t happened just yet. However, he has been in two grinding early season clashes, so it’s worth giving him one last look for a few more rounds, but it’s hard to see him matching the elite CTWs.

Morris will benefit from moving to a rampant Roosters attacking outfit, but with a high breakeven there’s no use even considering until we see how he gels with his new teammates.

Keary is obviously another who will be significantly impacted by the tough fixtures against the Rabbitohs and Broncos on return. I really do think he can catapult himself into the elite SuperCoach 5/8s this season, but it’s worth watching him for the next two rounds while he has his high breakeven. He doesn’t have the base stats of some opposing halves (18BPG in 2020), or the goal-kicking duties, but his attacking ability is exceptional.

With Cooper Cronk out of the way it’s his team to run, and at 28-years-old he’s ready to hit his peak in the NRL. Owners face a tough choice to hold or sell, but with a high breakeven and stacks of trades available it may be worth parting ways with him for now. His 17 from Round 1 will drop out of his rolling average on return, so his breakeven isn’t quite as daunting as it looks. Watch for him to be a serious purchase at a discount from Round 5 onwards.

It’ll take time for Flanagan to settle into his new club, and once he does he may become a viable purchase with goal-kicking duties intact. But until he’s fully comfortable in his new surroundings he’s a wait and watch.

I doubt JWH will ever match it with the elite FRF options, particularly in the twilight of his career, but he is pumping out some serious numbers. In two games thus far, he’s averaging 61PPG with 61BPG. His minutes are similar to recent years at 52MPG, but he’s upped his output to 1.17PPM.

Boyd Cordner’s return may impact him though as Angus Crichton will likely spend more time in the middle third of the park. On pedigree alone he’s hard to warrant purchasing, but let’s keep an eye on what he pumps out over the next month.

Friend will warrant genuine consideration if and only if he secures the 80 minute hooking role. With promising rake Sam Verrills on the bench it’s highly unlikely to occur.

SST was a highly debated FRF option in pre-season and he’s been okay so far. In a promising sign he has upped his minutes slightly to 53MPG, mainly due to the fact he played reduced minutes at times in 2019 through injury. His base of 49BPG is fairly solid, but he has had his scores slightly inflated with a try.

Like JWH, he may drop minutes slightly with Angus Crichton spending more time in the middle, but it shouldn’t have to significant of an impact. He’s a genuine wait and watch for now. Owners can hold for the time being and reassess upon return. Non-owners will want to see a touch more before purchasing.

Cordner will return in the second-row after missing the opening two rounds of the season. He likely replaces Angus Crichton, although Mitch Aubusson may move to the bench.

He’s a very solid SuperCoach player when fit, but as his body continues to age he’s picking up more and more injuries. Crichton will be a serious purchase if he ever cements an 80 minute role.

Aubusson has actually been decent in the opening weeks, but there’s better buys available.

Radley is owned by a reasonably high 11% of teams. He was rubbish in Round 1, scoring 25 points in 55 minutes. In Round 2, he went nuts in producing 70 points in 69 minutes with a mammoth 64 in base. If he ever secures big minutes on a week-to-week basis he could evolve into a serious SuperCoach prospect, but there are too many variables impacting his game time.

Furthermore, he is the man likely to be impacted most by Cordner’s return. It’ll mean Angus Crichton spends extended minutes in the middle third of the park, and Radley is more than likely the one to lose game time. He’s probably a sell for owners, although you could afford to watch one more week.