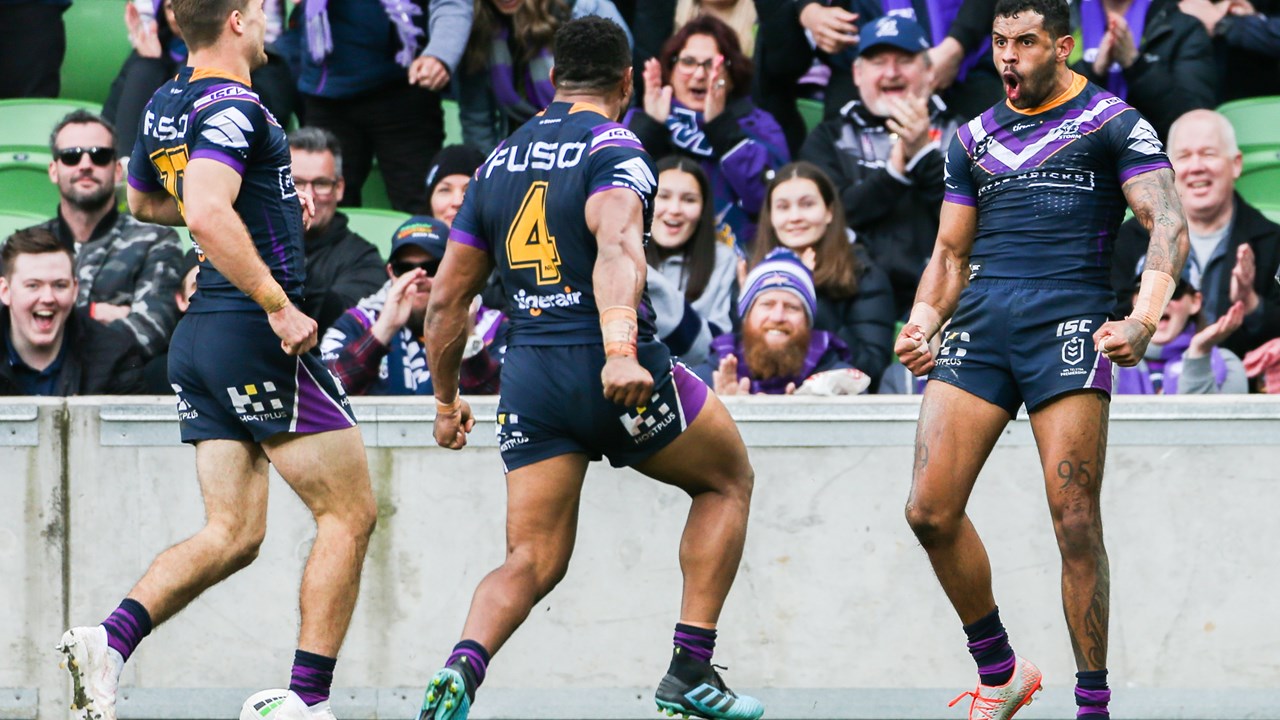 The Storm have made a perfect start to the season, and unsurprisingly boast stacks of SuperCoach opportunity as a result.

Little Pap hasn’t exactly lit up SuperCoach as predicted by many, but he’s looked exceptional without the aid of any attacking stats. His base of 34BPG is enormous and he’s been involved in two grinding games against Manly and Cronulla. He’ll crack big scores within weeks of resumption and should click above the $600k barrier in no time.

Unfortunately it won’t occur as quickly as intended, as we’ll have to wait longer to upgrade to Tedesco/Trbojevic. Papenhuyzen can match the elite fullback pairing in the future, but he’s probably a season away from nearing their heights on a weekly basis.

The flying Fijian scored a double in the season opener, albeit without linebreaks, and scored just 59 points. His base of 18BPG is rubbish and therefore isn’t a realistic option unless you believe Melbourne will go on an absolute tear on return. Pass.

We know Addo-Carr can go large, but realistically he should only be considered when bottoming out in price completely as a match-up dependant option.

While he’s been a defensive stalwart in actual NRL, Seve doesn’t have a SuperCoach friendly game and shouldn’t be considered. While it’s unlikely he’d be dropped, the signing of the highly regarded Paul Momirovski from the Tigers is also a concern.

Olam is fairly well a carbon copy of Seve as far as SuperCoach credentials go. He’s impressed in the NRL this season, but won’t figure prominently among the top scorers. He did average 50PPG last season, but at $464k there are far superior options in the same price range.

Munster has been one of the flops of the opening rounds and leaves owners with a tough decision to make. If the comp wasn’t reduced there’d be a strong case to sell, but with a shortened season it’s probably worth copping the price drop on the chin.

He’s averaged 33BPG, but hasn’t produced a single major attacking stat. The scores will come, so he’s likely one to hold on to. How the Storm’s fixtures are scheduled around Origin will have a major say in whether he’s a hold or sell.

Hughes went boom in Round 1 with a pair of try-assists in a dour affair. He came back to earth in Round 2 with just 23 points against the Sharks.

He could figure in SuperCoach in the future, but Munster would likely have to go down injured which would see Hughes take a more prominent playmaking role in the spine. His base of 29BPG is respectable, and he has a knack for finding attacking stats, but he’s still a tier below the elite HFB options.

Slightly reduced minutes to Finucane due to injury has seen Bromwich average an impressive 58MPG. He’s shown glimpses of his former SuperCoach self as a result, leaving him with inevitable price rises. His base of 55BPG is mammoth, so there’s some temptation, however it’s unsure if Bellamy will continue to play him in an increased role.

The reduced season means he won’t have to be managed over the extended period, so it’s possible. However, Finucane will play an increased role on return, as will Asofa-Solomona and Welch who were eased back from injuries prior to the break. There’s too much uncertainty, so let’s take a greater look as his price won’t spiral out of control.

If Cook continues to play away from his dynamic running game, Smith may well regain his place as the premier hooker in SuperCoach. With an abbreviated season, we will struggle to get the rise in squad value to accommodate both Smith and Cook, so coaches have a tough and vital decision to make in coming rounds.

The abbreviated season means Smith is unlikely to be given any significant breaks in matches or rests at the end of the season. This fact alone makes him extremely appealing, despite the return of Brandon Smith. He does have a pair of try-assists to his name, but the signs are as promising as ever for CS9.

Kamikamica has flown under the radar enormously in the opening weeks to sit with a -35 breakeven. The issue is already mentioned under Jesse Bromwich, with the returns of Asofa-Solomona, Welch, Smith and extended minutes for Finucane.

The returns probably see him demoted to the bench or at very least a major reduction in minutes. He’s averaged 63PPG in 46MPG at a ridiculous output of 1.37PPM. Basically, if he gets a start on return he’ll be an exceptional short-term cash grab, but if named on the bench he’s more than likely a trap.

Kaufusi has been okay to kick-off his 2020 campaign, but his heroics of 2017/18 seem past him. His averages in these years now appear to be a direct result of his combinations with Cronk and Slater. Pass.

Bromwich hasn’t been able to match his breakout SuperCoach season in 2019 that saw an average of 64PPG. That season was littered with attacking stats, so a regression was almost inevitable.

There are far safer 2RF options that boast higher ceilings. Best case scenario he can possibly be considered once bottoming out completely in price as a POD. Pass.

A HIA and injury spell has seen Finucane average just 43MPG in the opening two rounds. Expect this to rise to 55-60MPG on return, making him a viable money generator once bottoming out in price. He’s not a keeper, and probably won’t be a buy, but if he drops enough he could be considered based on a solid enough SuperCoach pedigree.