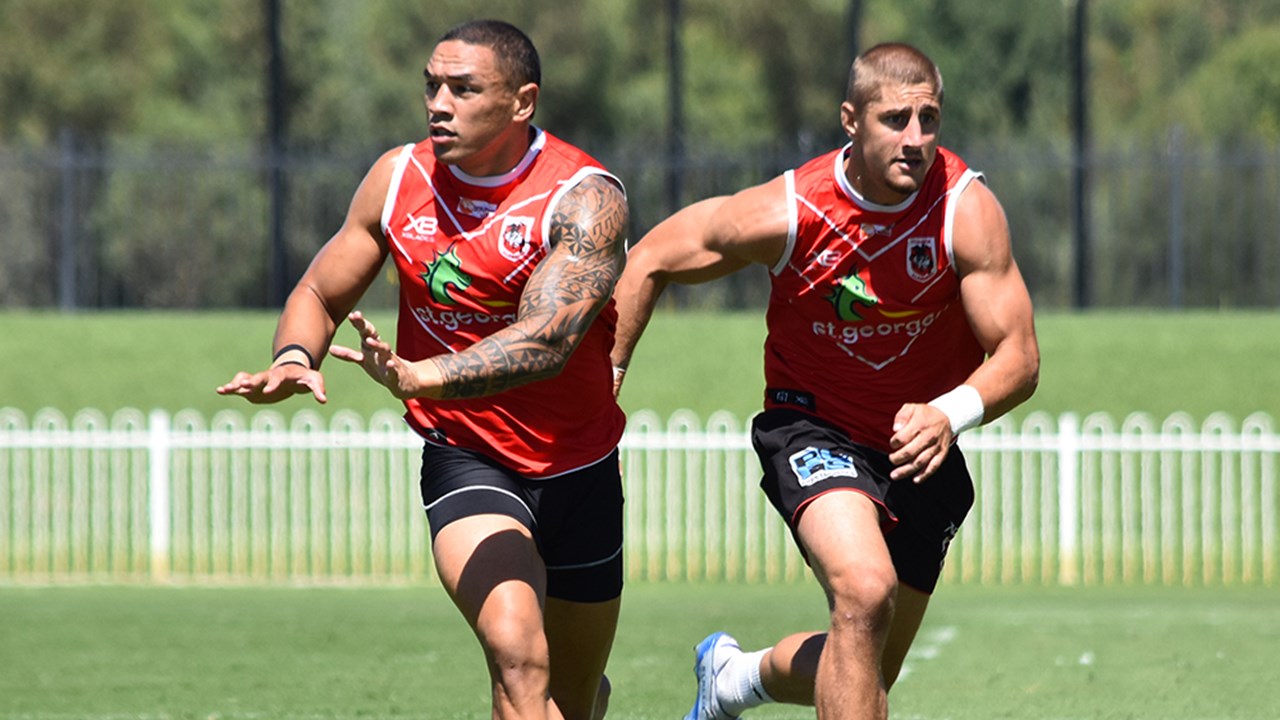 The Dragons have had an unflattering start to the year, but have maintained SuperCoach relevance, with Cam McInnes’ return to have big implications on the pack.

Available as a dual position HOK/2RF, McInnes will warrant serious consideration on return to play. Fortunately we’ll get to see two full rounds of how his touted hooker/back-row role will impact his SuperCoach output before any price rises occur.

With a host of forwards returning, you can likely put a line through all these men for the rest of the season unless injuries occur.

Dufty earned a first grade reprieve in Round 2 at the expense of Zac Lomax who couldn’t handle the high ball. He excelled with a brace of tries on return, likely doing enough to cement his spot for the time being. In his score of 65, he had an abysmal 14 in base.

He has shown glimpses of SuperCoach potential at stages in the past, but poor base stats and job security issues have brought about his undoing. If he goes big on return, he presents as a mid-range cash grab option, but it’s unlikely.

Pereira ticks along okay in SuperCoach terms, but would need the left edge of the Dragons to start firing to warrant even the slightest consideration.

Oh Zac, you’re messing with the lot of us. Despite scoring 55 in Round 1, many unconvinced coaches sold the utility back following his relegation to the wing. He produced another 55, leaving him with an enticing breakeven of -11. In both games he scored two of the softest tries you’ll see.

Coaches who held will be laughing, while those who sold will be grinding their teeth together. Nonetheless, he could easily come out and score a sub 25 score in Round 3. Unless named at fullback on resumption, he’s not a buy, nor is he a play in 17s.

Picked by almost half of SuperCoaches, Wiliame has underwhelmed early in his 2020 campaign. While substantial scores weren’t expected, many played the centre in their 17s following his strong trial form. He produced scores of 23 and 43 (including a try), with a base of 25, which is a pass mark for a bargain CTW cheapie. He hasn’t offloaded, has just two tackle breaks, and isn’t getting involved in much of the dirty work.

Provided he keeps his spot, he’ll earn some nice price rises, but you’d be a brave coach to play him in 17s on any given week. If for some reason you don’t own, he’s still worth the purchase at the price. The Dragons have signed Moses Suli from next season, with Tim Lafai or Euan Aitken to be moved on, so this should only help Wiliame’s job security.

Tim Lafai is the SuperCoach gun that never hit his straps on a consistent basis. He averaged a monster 65PPG in 2017, and 61PPG in 2014 when attacking stats weren’t scored as highly as the current day. He hasn’t averaged above 45PPG in the past five years outside of 2017.

He busts tackles, can offload, and was once an attacking weapon, but fails to put it all together on a weekly basis. As a result he’s tempted coaches in previous years, but his SuperCoach and potentially NRL days appear numbered.

Norman has struggled to accumulate points thus far and isn’t near the class of 5/8s or fullbacks in SuperCoach. Pass.

Hunt hasn’t quite hit the ground running this season in a small sample size. He’s a high quality SuperCoach player, but like Norman, isn’t in the class of the elite halfback options.

One of the game’s great characters, but as a SuperCoach player who relies on workrate, Graham’s days were numbered with a significant reduction in minutes.

Luke has failed to capitalise on the starting opportunity in Cameron McInnes’ absence. He’s averaged 60MPG, an increase on his time on ground at the Warriors in 2019, but it hasn’t translated to SuperCoach scoring. McInnes will be available when the competition restarts, so Luke isn’t an option.

Vaughan peaked plenty of interest throughout the pre-season with word James Graham would see a reduction in minutes. He’s been extremely solid thus far, and most importantly has seen a significant increase in game time to 60MPG. The Dragons have had several mid game injuries though, which may well have inflated his minutes, so beware.

Regardless, he’s a player who traditionally ups his output with reduced minutes, so it’s not an enormous concern if they do regress a touch. We all know his capability of crossing the line, so he’s a very decent POD in the front-row. But it may be worth seeing the forward rotation with McInnes and potentially Jack de Belin back in the side on return.

Frizell looks a trap for anyone considering him following a strong start. He ticks every box so far: cheap, negative breakeven, high average and playing 80-minutes. However, Frizell hasn’t averaged near 80-minutes in his career. Back-rower Tyrell Fuimaono came on at centre via the bench early in Round 1 when Mikaele Ravalawa was injured, likely forcing Frizell into an 80-minute stint.

Two linebreaks in Round 1 also inflates his score a touch, although he is capable of jagging fairly frequent attacking stats. He hasn’t averaged above 56 in many years, and is joining the Knights next season, so don’t expect the minutes or scores to continue.

Fuimaono will be a popular purchase on resumption with -39 breakeven. Even if named on the bench, he will see a big price rise, but my gut feels says he plays very few minutes with Sims, McInnes and potentially de Belin returning.

He played big minutes off the bench in Round 1 when Mikaele Ravalawa was injured, and deputised for the suspended Tariq Sims in the back-row in Round 2. He could be a quick cash grab, but there’s alarm bells around the trade, so tread with caution.

Lawrie has been in beast mode with a base of 56BPG in 55MPG to begin 2020. Unfortunately he’s awkwardly priced, and the returning cattle will likely see a reduction in game time for Lawrie.