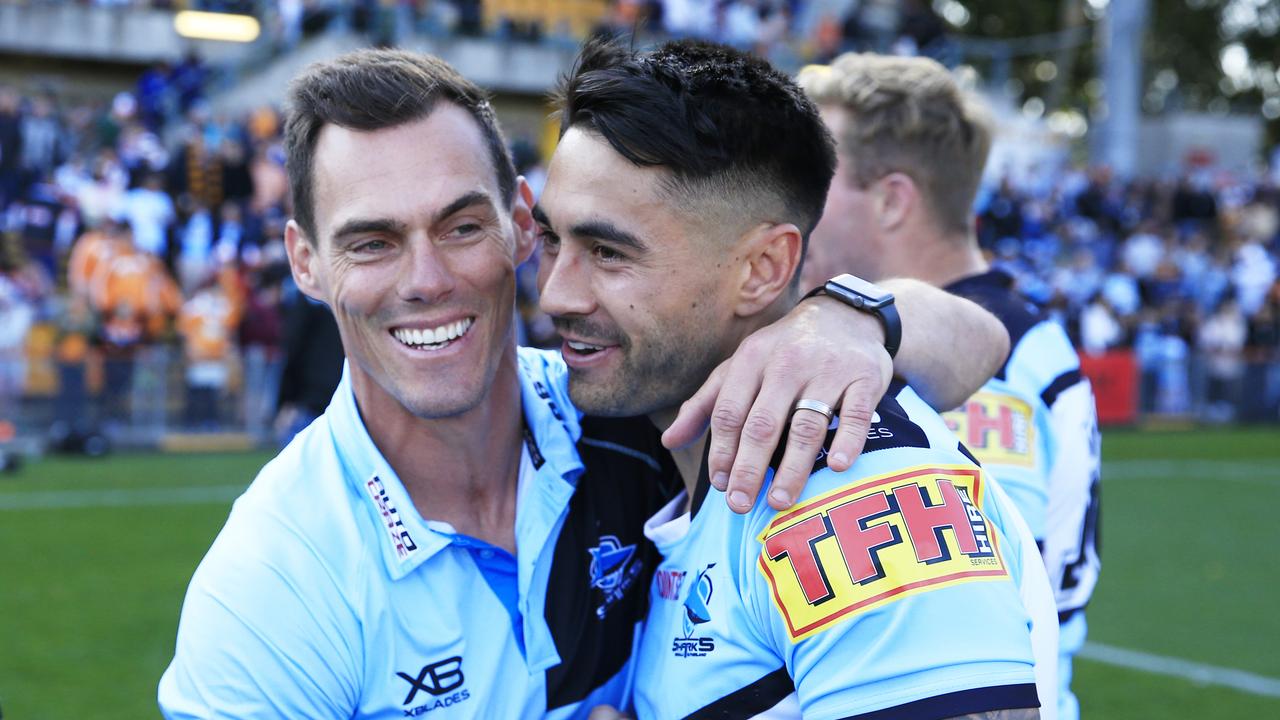 Despite being winless to begin the season, Cronulla’s squad are littered with SuperCoach options in 2020.

The make-up of Cronulla’s bench will have major SuperCoach implications. One of either Rudolf of Magoulias will likely miss out, but with what we’ve seen thus far you’d imagine Rudolf holds his spot. Furthermore, it’d be huge for every middle forward at the club if second-rower Scott Sorensen reverts to the bench with Nikora’s return. A three middle bench would be an issue. Rudolf increased his minutes from 30 in Round 1 to 42 in Round 2.

This may have been a ploy from Morris to get a bigger body in the middle of the park against the Storm, so whether it’s maintained is unknown. He’s scored 41BPG in the first two rounds and looks set for a nice cash rise, so he’s a pretty safe option on return should he be suited by the bench selections.

Magoulias’ buy credentials rest solely on the bench rotation mentioned above under Rudolf. He scored a try in an impressive 47 minutes on ground in Round 2 after missing selection in the season opener.

Having played just one game, we will get another free look at his minutes (if selected) before any price rise occurs. Hold fire and reassess if he gets the nod in Round 3 and sees decent time.

There’s been mixed reports on whether or not Matt Moylan will be fit for the resumption of the competition. Some sources says he’s good to go, others have suggested his hamstring is still playing up. It will have huge SuperCoach implications as cheapie Will Kennedy will drop out of the squad and remain in the wilderness unless Moylan were to go down again.

It’s hard to advise Kennedy as a buy or sell until we get solid news on Moylan. If Moylan is out for 2+ weeks Kennedy would be a nice quick cash grab, but even if he were to miss one week the trade wouldn’t be worth it. Furthermore, Josh Dugan may return at fullback if Moylan isn’t available. Let’s reassess when greater news becomes available.

Josh Dugan’s return will likely come at the expense of Sione Katoa. Dugan could return at fullback if Moylan isn’t available, but it’s more likely he’d come back on the wing. Dugan shouldn’t be discarded completely in SuperCoach going forward. If he can return to full fitness, which is a big if, his tackle busting ability and workload can make him useful. It’s fairly wishful thinking though, and he’s certainly not a buy at this stage. If Katoa maintains his place, he does so with a -40 breakeven and could be a serious cash grab option.

Mulitalo hasn’t been able to emulate his try-scoring spree from 2019, and thus sits with a triple figure breakeven. Pass.

Josh Morris departs to the Roosters, Bronson Xerri returns from injury, a fair replacement that. Xerri is a player I was enormously keen on for Round 1 before going down injured. It’s his ability to score from any position on the field when given a pinch of space that presents him with a vast ceiling. He was singled out by coach John Morris as an eye-catcher on return to training from the break.

Despite the obvious POD potential, there’s no need to jump on just yet. Let’s see him return with full fitness before eyeing off closely before his initial price rise. There’s every chance he’ll finish in the top four CTWs by season’s end, and the injury ensures he’ll be extremely low ownership for a while to come.

Ramien’s slow start to the year isn’t even close to as dire as it reads. While the points haven’t flowed in the opening rounds, his workrate has been immense. He boasts a base of 34BPG, meaning it’s the attacking stats that have eluded him. One potential issue emerging thus far is the fact that Shaun Johnson often plays short to his back-rower or cuts the centre for his winger.

While I still believe playing outside SJ will do wonders for Ramien, it is certainly a lingering issue. Aside from a few offloads, Ramien doesn’t have an attacking stat to his name. When these come, and they will, he could skyrocket his scoring output provided he maintains his strong base. With a high breakeven he’s not a buy just yet, but keep a very close watch on him in coming rounds.

The early signs from SJ have been extremely promising. You can almost disregard SuperCoach scores for players against Melbourne as they are such a resilient defensive outfit. SJ bashed out 95 in Round 1 against South Sydney and his running game was encouraging. In that game he put it all together, assisting tries, breaking tackles, offloading and just about everything else in between.

For those interested in his services, his 95 will drop out of his rolling average after Round 3, but his 28 against Melbourne will stay, so it’s probably worth waiting one more week to jump on. That being said, with a stack of trades available it may be worth going Cleary (two week suspension) to SJ to bank the points.

Particularly if you’re running a Cleary/Walters HFB combination, with the latter likely to be dropped with Grant’s arrival at the Tigers. Cleary can be traded back in for another HFB-5/8 in Round 5 with appropriate planning.

Townsend has had a lousy start to his SuperCoach season and shouldn’t be considered.

The SuperCoach demise of Big Fifi has been sudden and tough to watch. His knees appear to be hampering him more heavily each week, but perhaps the break in season allowed his body to mend? Fifita is averaging just 39MPG, and with a host of rookie middle forwards fighting for greater game time in the Shire, Fifita’s SuperCoach days may be numbered. Let’s hope his body and fitness have thrived with the time off, but it’s very hopeful.

Brailey has basically produced what we expected of him, a decent work rate and some attacking output for a reasonable average. The big factor is that he’s playing an 80-minute role, which bodes extremely well for his money-making potential. He’s also quite nippy around the ruck and is a creative young rake, so attacking stats will come and present 60+ scores.

Hopefully he jags one in coming rounds in time for a downgrade to Tigers recruit Harry Grant. Provided Grant plays an extended role at his new club, we’ll almost certainly have to part ways prematurely with Brailey, but there’ll be some reasonable coin made in the process. Let’s hope John Morris doesn’t throw a curve ball by naming Connor Tracey on the bench.

Woods has seen a slight increase in game time to 49MPG, but it’s not quite what we’d hoped for. With enormous depth in the middle it’s hard to see his minutes increasing to a number that’d warrant considering him.

Graham has always been an upper tier back-row option, but he’s never cracked the elite class of SuperCoach players. He’s started this season poorly and isn’t worth the investment at this point.

Nikora will return after missing Round 2 through injury. After losing his dual CTW/2RF positional status from last season it’s hard to see him matching the absolute elite back-row options. That being said, his combination with SJ on the right edge is lethal, and he’s in just his second season, so don’t write him off. He looms as an exceptional POD option down the track, but let’s give him time to build on that combination and regain full fitness.

Williams was a boom buy for Round 1 after winning Paul Gallen’s vacant lock role. He’s disappointed statically for those that jumped on. Frustratingly for owners, he’s actually received the substantial rise in game time to 54MPG as predicted. Unfortunately, his output has plummeted to 0.64PPM with the rise in minutes, an effect we often see with rookie forwards.

While he is a sell, I wouldn’t write him off just yet. He did score 42 points in 61 minutes with 48 in base in Round 1. Again, the SuperCoach wall that is the Melbourne Storm obliterated his scoring potential in Round 2 for just 26 points. Optimistic coaches are hoping Billy Magoulias nabs Williams’ starting spot in Round 3, but it’s pretty unlikely so don’t bank on the move as you plan your five trades.