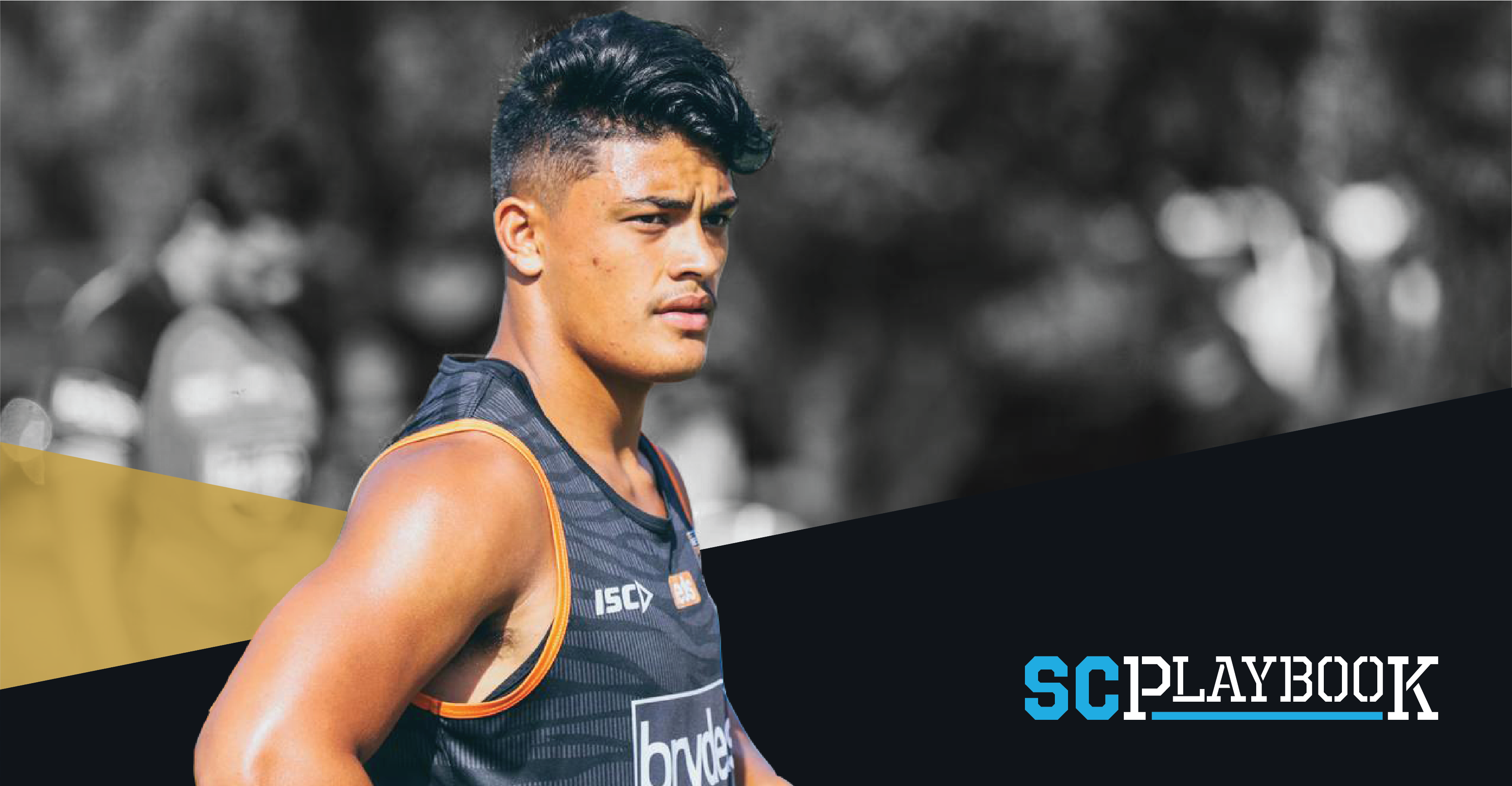 With the 2020 season rapidly approaching, SuperCoaches are in a panic as they face what appears to be the fewest amount of genuine cheapies to begin the year.

We’ve assessed every player below $300k with genuine NRL credentials in 2020, including a few additional players of interest who have either impressed during pre-season or have been selected by SuperCoaches.

The rankings are assessed on Round 1 SuperCoach buy credentials, rather than specific points output or even starting prospects.

E.g. Starford To’a may start at centre in Round 1 for Newcastle, yet Cooper Johns, who likely won’t start for Melbourne, is ranked as a better buy to begin the year. To’a will likely drop out once players return from injury early on, while Johns is one injury, or poor form from Jahrome Hughes, away from a starting halves role in a gun side.

The list is extremely volatile and will chop and change dramatically in the remaining weeks of pre-season.

The 24-year-old prop forward boasts plenty of talent, making him an outside chance at a bench role for Round 1. Cronulla lost plenty of forward depth from 2019 in Paul Gallen, Matt Prior and Kurt Capewell. The issue for Rudolph is that they have a stellar crop of players set to fill the void, including Jack Williams, Braden Hamlin-Uele and Billy Magoulias. Thus it’s hard to see Rudolph gaining many minutes even if named on the bench.

Chances: He may jag a bench spot, but regardless, minutes appear very limited.

Molo is a borderline cheapie at just below $300k. Across 24 games last season he averaged 24MPG for an average score of 32PPG. That’s a PPM of a ridiculous 1.35! If his game time increases there’s cash to be made, so let’s monitor and hope he gets his opportunity.

Chances: Unless minutes are assured, don’t start with him in Round 1. Assess minutes prior to initial price rises, then jump on if required.

Gilbert was named rookie and lock of the year in the QLD Cup last season and comes with enormous wraps. Gilbert was ranked seventh for metres made in the competition and third for tackles, so the work ethic is evident. The Cowboys don’t appear stacked with depth at front-row/lock, so Gilbert may not be far off the top-grade in the early stages of 2020.

Chances: Could jag a bench spot as soon as Round 1.

The son of Matty Johns has been turning heads during the Melbourne pre-season, with reports suggesting he’s an outside chance to start the season at halfback. Craig Bellamy’s search for a halfback in the post-Cronk era has been arduous, with current No.7 Jahrome Hughes yet to really lock down the role. Don’t expect Johns to be named in Round 1, but if Hughes starts the season slowly, the young playmaker could earn a start down the track. Starting with him looks a risk, and unfortunately Melbourne have the Round 12 bye so he won’t stand in for Cam Munster (Origin) until Round 16.

Brittain impressed in the Charity Shield, but unless Issac Luke goes down very early in the season, he’s unlikely to get enough minutes to warrant consideration. He played two games for the Rabbitohs in 2019, averaging 44PPG in 43MPG, so the scoring potential is evident if given extended game time.

Chances: In line to play as the Dragons no.14 while McInnes is out. Needs a very early season starting role prior to McInnes’ return.

Parry looks an NRL regular in waiting, the problem is he’s stuck behind Maika Sivo and Blake Ferguson at the Eels. He made two appearances for the club last season, scoring in both games for an average of 48PPG.

Chances: Basically, he looks to be one injury away from a start.

Melbourne and the Tigers are desperately keen for the historic player swap between Grant and Paul Momirovski to take place, but they’ve hit numerous roadblocks with the NRL and in now looks next to no chance of happening. If he’s stuck at the Storm, the hooker will be behind Cameron and Brandon Smith, so game time won’t arise. Grant starred in the QLD Cup last season, here are a few of his stats: 22 games, 14 tries, 21 try-assists, 22 linebreak assists, 40 tackles per game and 100 running metres per game.

Chances: Grant may get a start in Round 1 off the bench with Brandon Smith injured for the first month. However, it’s unlikely he plays many minutes with Cam Smith at hooker.

Cleary and Luai look set to start the year as the Penrith halves. This leaves Burton and Tyrone May (Round 5 return) vying to become the number one backup option. The 19-year-old Burton was tremendous in his one and only NRL game last season, proving immediately he’s up to the rigours of the NRL.

Chances: Either one or two injuries away from a halves call up.

The fact Penrith stuck by May throughout his recent off-field scandal shows their faith in the talents of the 23-year-old. Should either of the starting halves go down, he or Burton will start at five-eighth. May could well become the club’s likely bench utility when he returns from suspension in Round 5. He’d play limited minutes, so it shouldn’t impact his price or scoring too significantly.

Chances: Likely to earn a bench spot on return from suspension, but only relevant if starting.

Ash Taylor and Tyrone Roberts will start in the halves for the Titans, with Tyrone Peachey, AJ Brimson (fullback switch) and Tanah Boyd in contention as back ups. It’s almost impossible to assess thus far with a new coach in Justin Holbrook arriving. Boyd is a schoolboy star, and earned two NRL appearances last season in a massive show of faith from the club.

Chances: Probably two injuries off a start, but keep a close eye on the Titans’ pre-season fixtures.

In 21 games across the past three seasons Collins has averaged over 1PPM in very limited game time. He’ll need a handful of injuries to join the bench and see enough minutes to warrant consideration.

Chances: An outside chance for a bench spot, regardless, he won’t get the required minutes to become relevant early on.

Hopoate’s return date from a second ACL injury is uncertain, with predictions ranging anywhere from one-to-three months. There’s a significant chance he makes his NRL debut this season, but until we receive clearer word on his progress he’s a steer clear early on.

Chances: Will come into contention mid-season if he impresses on return from injury.

Faamausili played 12 games off the bench in 2019, averaging 19PPG in 19MPG. He’s unlikely to feature in Round 1 and would need several injuries in the Roosters pack to enter SuperCoach discussions.

Chances: Unlikely to see a 30+ minute role early on to warrant consideration.

Rodwell is a prop/lock with a chance at cracking the NRL in 2020 with South Sydney lacking depth in the middle. Cam Murray’s touted move to the second-row bodes extremely well for the Bombala product, who won Players’ Player for the Jersey Flegg side last season.

Chances: Unlikely early on, but can enter the frame with an injury or two in the pack.

In a sign of the club’s respect for him, the Kiwi-born To’a debuted in Round 25 last season. To’a crossed for a try on debut and at just 19-years-old has plenty of room for growth in his game. He could get an early season start with injuries at the club.

Chances: His best opportunity may be Round 1 with Best and Moga injured, but once they return early in the season he would likely drop dramatically. Tread very cautiously if named.

The PNG international looks an absolute weapon in the making, unfortunately he’s stuck behind a pretty stellar crop of backs at the Rabbitohs. Monitor the Alex Johnston situation closely, if he leaves it’ll do Gebbie’s chances of an NRL debut wonders.

Chances: Unlikely in the early stages of the season.

In a massive show of faith in his future, the young hooker is signed with the Tigers until the end of 2022. In a lesser show of faith, the Tigers are depleted for genuine hookers, yet Simpkin remains in the development squad. This is a strong sign they’re probably not ready to blood him just yet.

Chances: Unlikely in the early part of the year even if upgraded to the top squad.

Lemuele played NSW Cup for Canterbury in 2019, averaging two offloads and two tackle-busts per game, to go with his eight tries. There’s a centre role up for grabs at the Cowboys, with Lemuele in contention for the spot along with Justin O’Neill, Tom Opacic and Ben Hampton. With a strong pre-season, he’s a serious smokey for a Round 1 starting spot.

The 21-year-old Junior Kiwi is stuck behind some quality middle forwards at the Cowboys, and even if given a bench role would likely struggle for minutes.

The younger brother of Nat Butcher has plenty of ability, but has a long way to go to crack into the Roosters 17. He’s capable of playing big minutes at prop or in the second-row, and has a knack for finding the line, so keep an eye out as the year progresses.

Bailey appears a reasonable way off getting a run at the Roosters as it stands. He has a huge work ethic, but lacks offload and tackle-busting ability, which are vital to cheapie bench forwards playing limited minutes.

There’s enormous wraps on the 18-year-old Manly playmaker. Schuster is a five-eighth, but played second-row for NSW in the 2019 Origin clash. He was named SG Ball Player of the Year last season. With Dylan Walker playing semi out of position in the halves at Manly, Schuster is a chance at cracking the top grade in 2020 if he can prove he’s up to handling the step up against men. With a big future ahead, let’s hope he earns a debut in 2020.

Still just 20-years-old, Paulo has a promising future on the wing, but like Gebbie, will need Alex Johnston to leave to enhance his chances of a debut. Paulo did impress in the pre-season win over the Eels.

Ramsey lit up the Perth Nines with his blistering speed. The Dragons have three spots to fill on their roster, so the dual FLB-CTW could be in line to earn a call up. While he’ll need injuries to fall his way, the talent is evident, so watch closely as the season progresses.

Previously with the Bulldogs, Sexton was poached by the Titans in 2019. While the playmaker appears to have a big future in the game, he may have to bide his time throughout the season. He can enhance his claims by matching it with the men throughout the pre-season, so keep a close eye on how the Titans’ trials unfold.

‘Burbo’ isn’t in Manly’s top 30 squad so he won’t be playing Round 1, barring any significant changes throughout the pre-season.